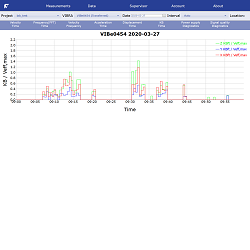 New software has been released for the VIBRA4-series. Multiple alarms can be set, for example a combination of a threshold value for velocity and acceleration. In addition an alert setting for alarm thresholds has been added. This alert percentage applies to all set alarms.

Extra graphs have been added including a separate Velocity – Magnitude graph that shows the Vmag or PVS (Peak Vector Sum). This is the amplitude of the vector sum for the three directions measured in real time by a VIBRA+.

The VIBRA+ processes the data in accordance to DIN 4150-3 and simultaneously to DIN 4150-2 Effects on persons. The graphs in the PC software show the KB values as well as the weighted KBFTr values per channel. The Vper values ​​are also displayed numerically in the legend over a selected period so that they can be easily compared with the code.

The VIBRA4 VIBe system now also uploads the measurement data to vibramonitoring.com for KB according to DIN4150-2. This upgrade is also part of the new VIBRA4 software package, available for users who upload the data from the VIBRA+ directly to their own server.